Thank you @twocoatsofpaint for the wonderful revie

The School mourns the loss of Claes Oldenburg. In

One left to submit your work to the 2022 Virtual A 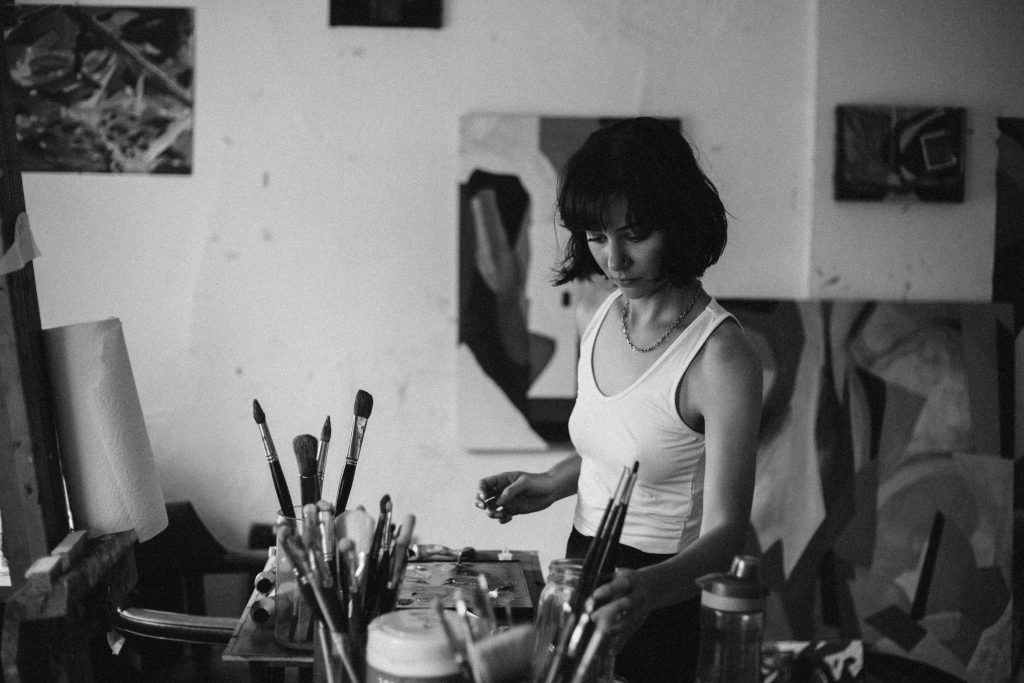 The choice to continue my education was less in pursuit of an MFA, and more so in finding a community that would nurture my growth as a studio artist.  I ultimately decided to apply to the New York Studio School after a series of encounters which showed that this was, undoubtedly, the perfect option for me.

I graduated from college in 2014, and a couple years later I was beginning to notice a shift in my practice.  Adjusting to painting outside of an undergraduate program proved to be a challenge, but over time my artistic tendencies began to clarify.  I rented a studio space in Bushwick and entered a routine that allowed me to bartend during the day and paint at night.  During this period, I was exploring the act of painting in ways that I was unable to do when I was working in my bedroom.  That year in the studio opened many eyes to what aspects of my practice were most important to me, and also allowed me to consider what it is that I may be missing.  Working in mostly isolation, I came to realize that what I was craving most, was a community where I could regularly share and talk about painting with other practicing artists. 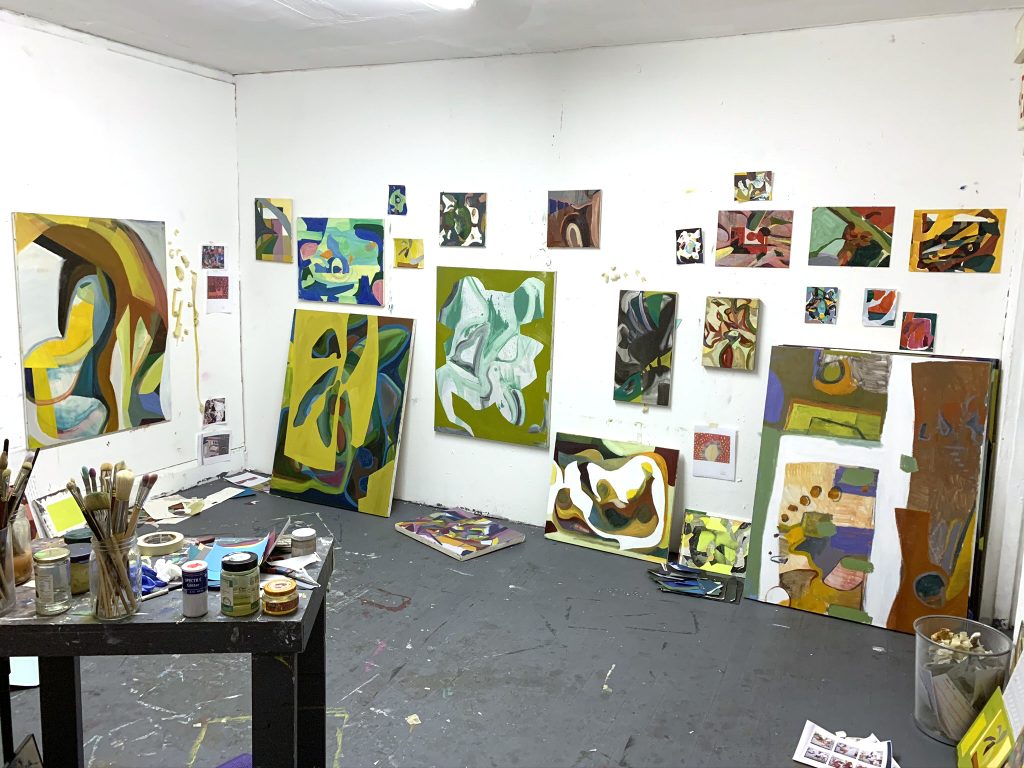 I first experienced the school when I found myself at the MFA Thesis Exhibition opening in 2017.  Without prior knowledge of the Studio School’s design, I was deeply impressed by the manner in which this building was completely transformed to an exhibition space.  It was such a unique set up; I became curious to know what the school looked like outside of this exhibition period.  Walking through each floor, the air felt thick with creative energy; pure excitement was vibrating along the walls.  Everyone’s work was so diverse and lively, I felt an immediate connection to the School that night.  It was then that I began to consider joining the MFA Program.  I was also friends with another alum, who when I mentioned my encounter at the opening and how excited by the school I was, she told me she was also an alumni (which I didn’t know at the time), and that being a student there was one of the most spectacular times of her life.  I knew that this was the right choice, and after taking a proper tour of the building a few months later, I began the process of applying. 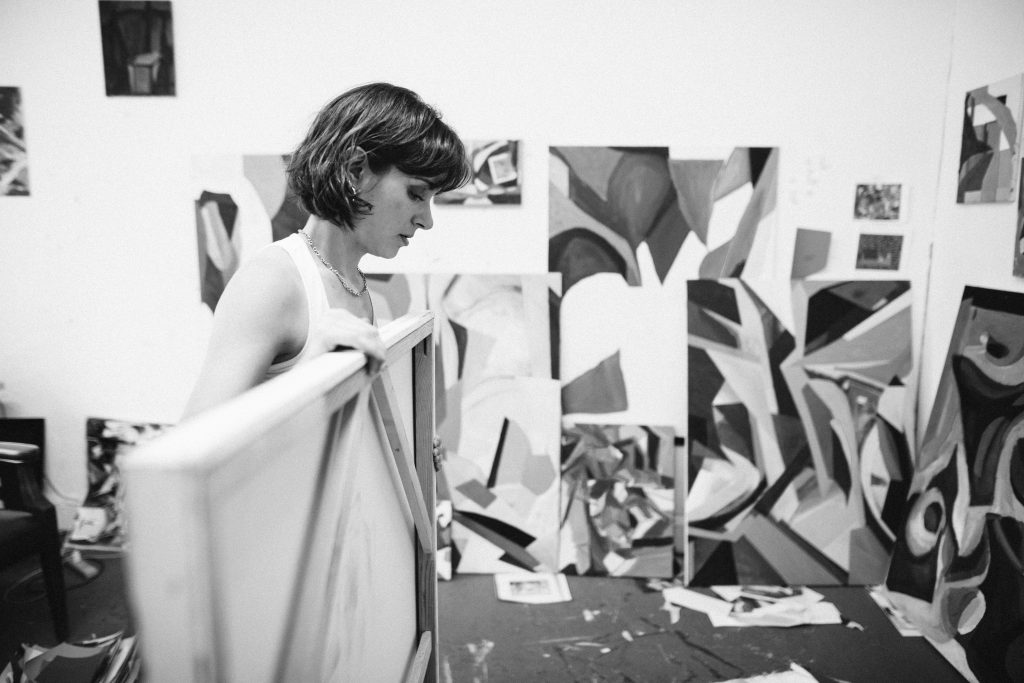 Flash forward to my first semester in Fall 2018, I entered the school with no limits on what kind of artist I wanted to be.  With this first year, I intended to shed any preconceived notions on what I liked and didn’t like. By taking as many classes as possible, I set myself up to absorb a plethora of information to help forge my path.  I was ready to immerse myself completely. Upon entering the MFA Program as an abstract painter, much of previous work had developed from intuition, and I hoped to expose myself to a world outside of the realm I felt most comfortable in and to grow stronger in my vision.  I’m not an observational artist, but I chose to work with Dean Graham Nickson and Elisa Jensen to paint from a model every morning, simply because it felt the most foreign to me.  I also wanted the specific color training that I heard would come from working with Graham.  During that year, I wasn’t necessarily making work that I loved, but I was learning an incredible amount about myself as an artist. That development was more important to me in that first year, rather than making “good” work.  I provided myself with the tools that I would eventually use to set my thesis in motion the following year. 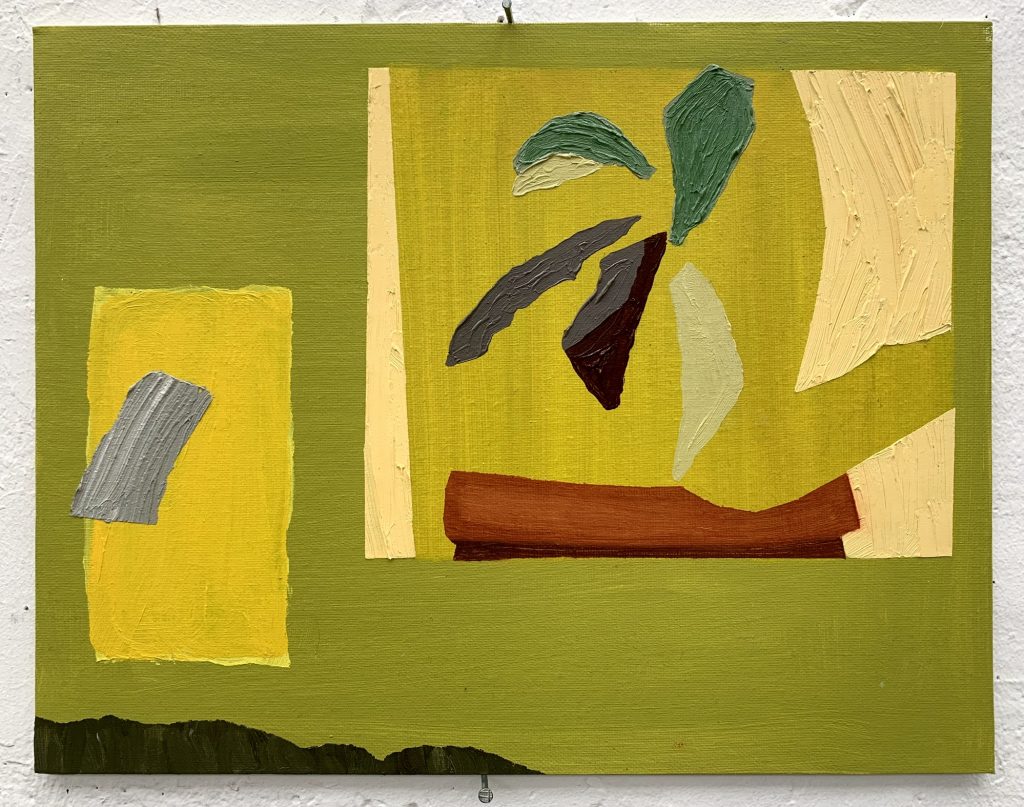 I was enrolled in many drawing classes that were important to my development, but Friday Evening Painting on Paper with Kaitlin McDonough was specifically important.  It was in that class where I really began to understand how essential the act of collaging was to my process. This was one of the only constants I had during those 2 years, and that allowed a special dialogue to form between Kaitlin and myself.

Come Fall 2019, I began working with Judy Glantzman and Kyle Staver.  It was then that I began to apply the information I learned the prior year into a body of work that felt more connected to my vision.  Judy and Kyle both encouraged a playfulness in my studio that led to a multitude of projects.  The notion of what makes a painting “good” shifted during this time, as I began using materials unfamiliar to me and putting absolutely no limits on how the work could evolve.  They directed my focus to the importance of taking risks and shattering rules that we sometimes place upon ourselves.  This is what continues to fuel my practice, and keeps the process consistently exciting. 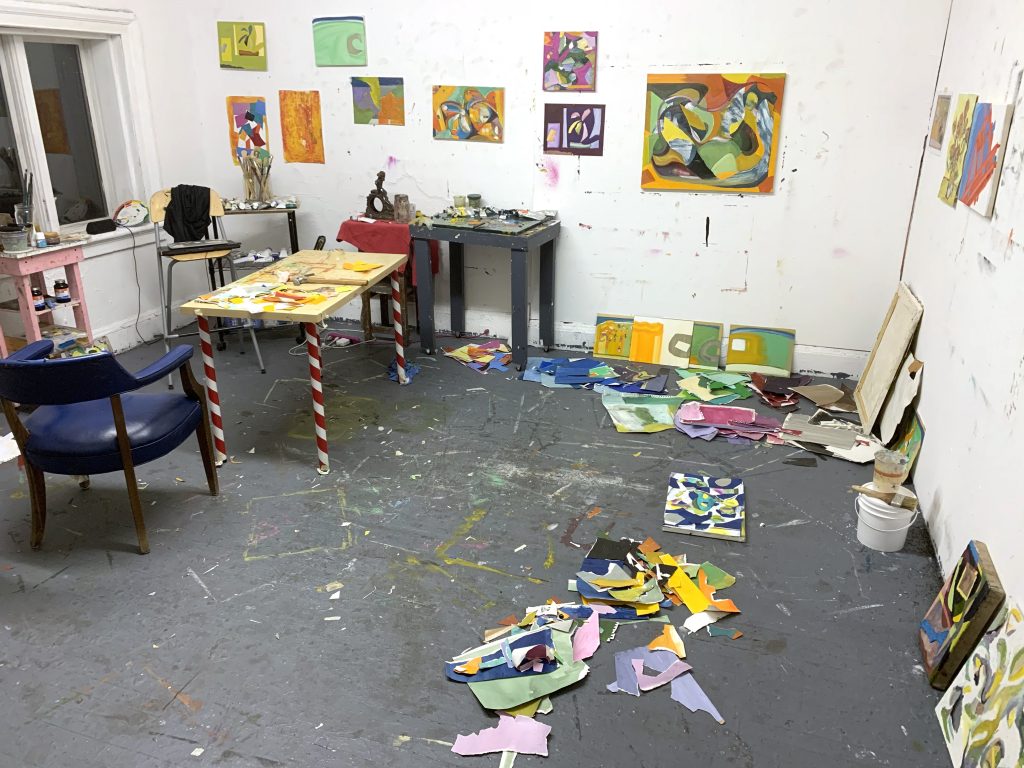 My time working in the MFA Program at the New York Studio School has allowed me to become more sensitive to my touch, and engage with the intuitive process in more meaningful way.  My studio sessions are better focused, and therefore the work has become connected in ways I never could have imagined. I firmly believe that the past two years at the Studio School accelerated my growth in ways I could not have reached if I had continued working alone in my studio.  I was given the confidence to move forward with creating work outside of the school, as well as the courage it takes for one to continue doing so. 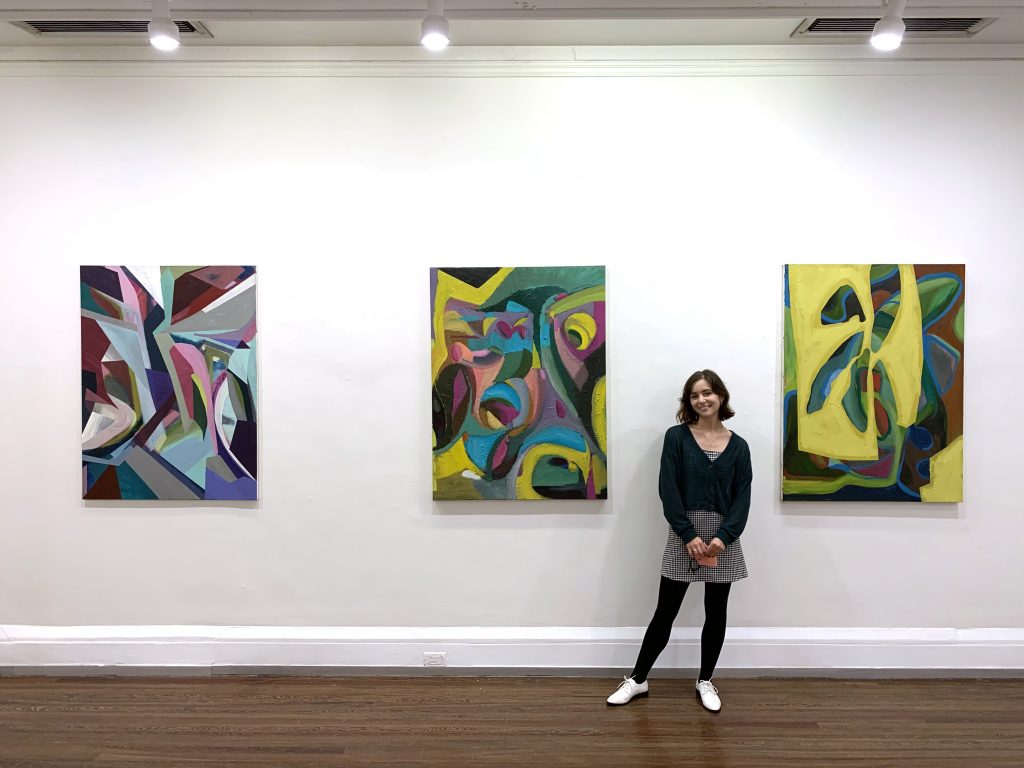 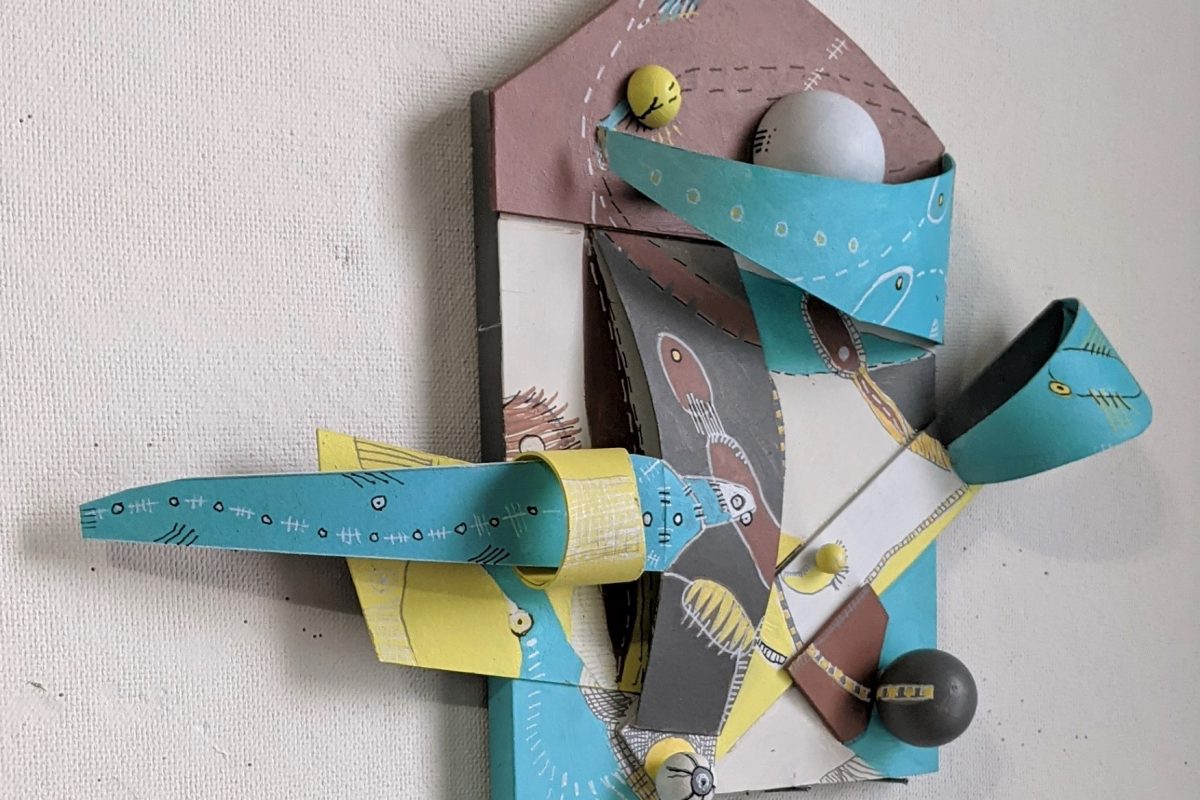 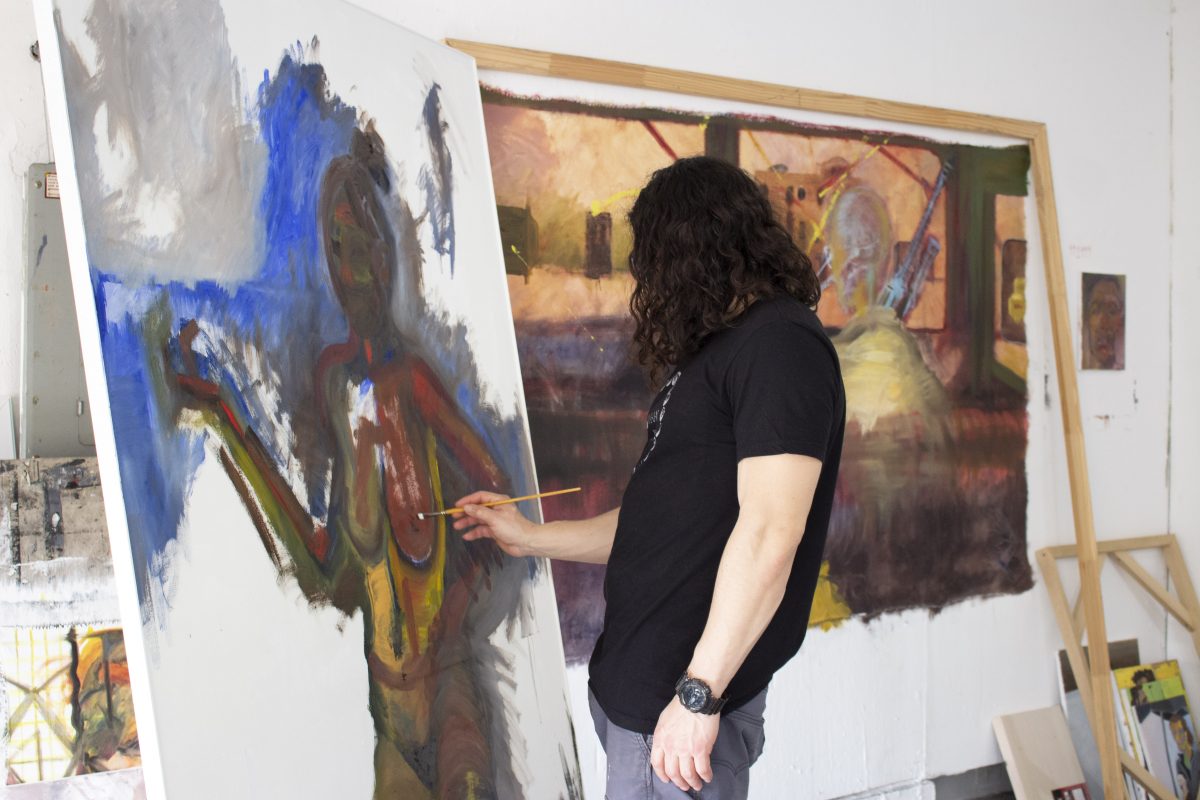 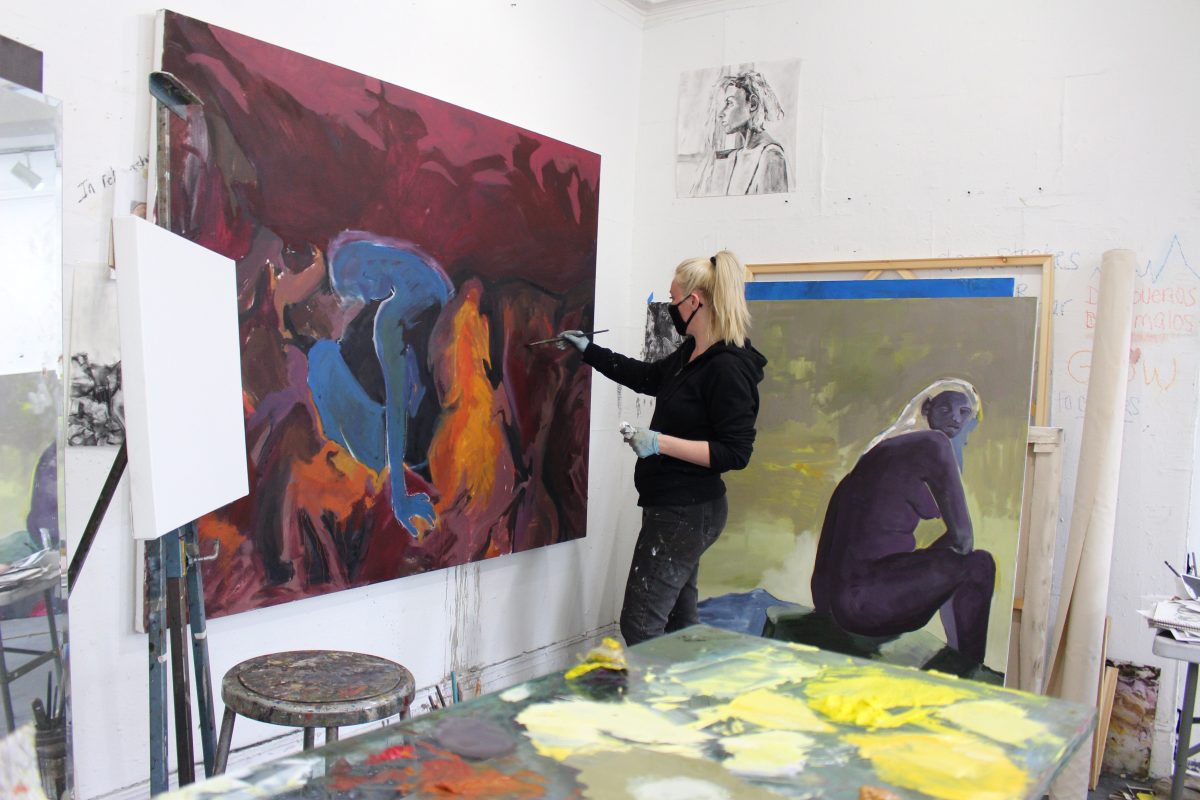