The Whitney Studio has always been a hub for the New York Studio School community; through lectures, meetings, critiques and dinners the space has remained a core gathering place for the School, just as it was for Gertrude Vanderbilt Whitney during the early part of the 20th century.  Robert Winthrop Chanler’s installation, a bas-relief sculptural fireplace and ceiling, continues to amaze visitors, alumni & current students.  The intricacies of movement and delicate details sing individually, yet also stand firm as a larger whole; one can only imagine the riot of color that ran across that ceiling before it was whitewashed.

Living out of his townhouse / menagerie “The House of Fantasy” near Gramercy Park, Chanler created for himself a persona of playboy, aristocrat, bohemian and eccentric artist during the early 1900’s.  Descended from the Astor family, Chanler studied extensively in Europe before settling in New York, where he took on a number of commissions, including the interior of Whitney’s studio.  Chanler was known for his versatility; and his paintings, screens, carvings and decorative work evoked the whimsical and ambitious works of past artists such as Bosch and Bruegel.  He forged a reputation as a talented and unique interior decorator.  A portrait artist as well, Chanler was known for his quick and biting impressions of his sitters, and Carl Van Vechten wrote the following account of his session with Chanler… (1)

“To be painted by Robert Chanler is a career and a social experience, almost an education… on the model stand, as big as a small stage, from a myriad of stuffs you choose your own background, you set yourself in the flare of brilliant artifical lighting.  An oval mirror is skillfully arranged so that you may watch Bob fill his vacant canvas.  The ice in the cocktail pitcher continues to tinkle.  Silver and magenta fish play on the gold screen behind Taylor Gordon while he moans the St. Louis Blues; Yorkshire terriers fight in one corner of the studio; in another, a poet composes verses on the top rung of a meaningless ladder; in the centre of the floor a flamboyant female is making Shanghai gestures.  All the time Bob is painting, painting like hell!!  He slings paint against the canvas, hurls it sadistically until you wonder why it doesn’t go clean through, while he carries a running commentary explanatory of his method: “Work like hell.  Never know anything.  Bad painters know.  Try this blue for shadow on the nose: may come out right.  Can’t be sure.  Rotten!  Try red.  Try green.  Hell!”” (2) 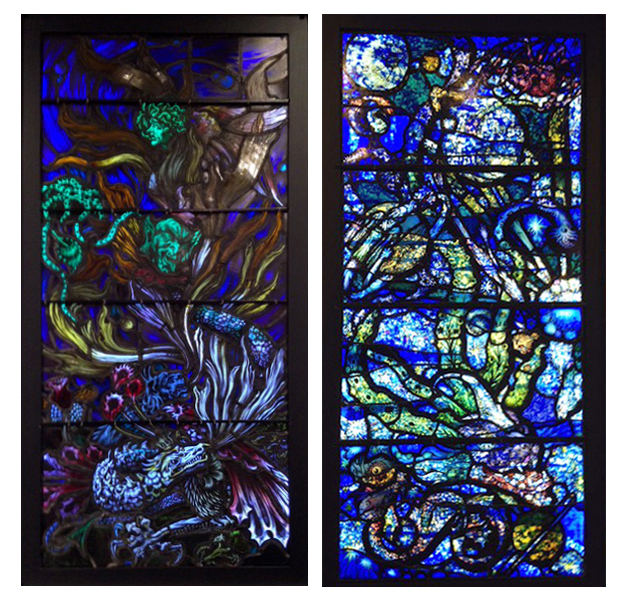 Seven stained glass windows were originally installed in the room. Red and gold paint flared up the central fireplace, massive painted folding screens spread through the room, light filtered through the stained glass, and heavy drapes hung down to create a sumptuous and private space energized by the collective efforts of Vanderbilt and Chanler.  The windows were continuations of Chanler’s exotic and almost sinister themes of the underwater realm meeting the cosmos.  Mythical creatures that are part bird and part fish stare with wide glowing eyes, serpentine coils move through the compositions, and the deep blues and purples shimmer as light passes through the panes.  The works are startling and strong enough to have set the tone and atmosphere for the entire space.  Five of the windows are owned by Retro Modern, a antiques shop around the corner, and the other windows are owned privately.

Fundraising efforts are underway by the New York Studio School for a complete restoration of this glorious space.
A great article about Chanler and his works on the East Coast- http://www.nytimes.com/2011/06/10/arts/design/robert-winthrop-chanlers-animals.html 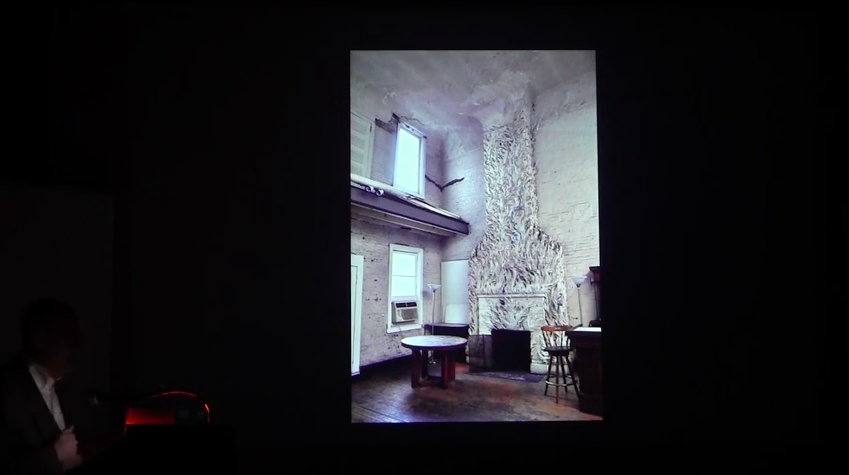