Enjoy a panel discussion on the power of drawing a

Tomorrow, Thursday, May 12th at 2pm ET on our Inst

"The amount of time given for each project was jus

Congratulations to Kyle Staver (@kylestaver) on he 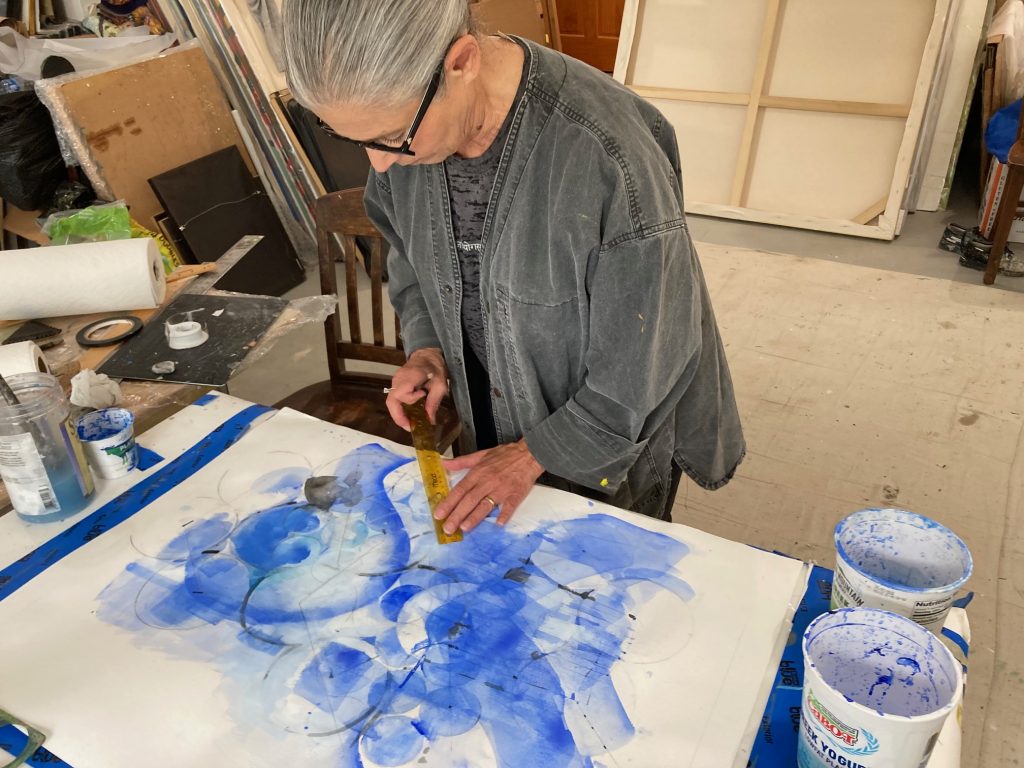 Jeanette Fintz: Things are quite different in my studio life, in some respects, then they have been for many years. Instead of walking 30 ft to my studio I’m walking through the streets of Hudson to a rented studio that’s also shared with my husband. That’s the new reality and hopefully a temporary one.  In inclement weather we drive the 8 or so blocks and take a lunch or order occasionally from the many places on the street.  I change into my work clothes and usually if I’m in the midst of a painting I will have brought several digital printouts of possible revisions or changes that I have experimented with on the computer. I make tea, turn on kirtan music usually and stare at my new options. My paintings for the past 4-5 years have been based on geometric pencil drawings and translucent vellum collages derived from the Islamic circular grid, many of them revised overtime using Illustrator and Photoshop to test out shape, color and line changes. When I’m beginning a new piece I select one of the variations of geometric configurations that intrigues me from those posted on the studio walls. The spaces pull on something in me like a recognition that communicates, like a gesture in choreography, non-verbal but suggestive of feeling and location tied together. If I’ve started the transfer from small drawing to the larger canvas I’m working with pencil, ruler, T -square, protractor, tape and compass on a primed and uniformly painted surface. I still stretch my own canvases. My palette of the past 4 years has been reduced quite a lot (up until 2017 I was using full blast color!), to concentrate on the space becoming more expressive and airier. The choice of ground color and value is important in setting up the way the light will move up from the ground, building atmosphere.  If I’m in the middle stages, I’m refining the space, using tape of various widths and colors to redraw the edge connections to hone in on something more clear, and simultaneously more mysterious than the original drawing study. My husband and I have learned how to give each other a lot of space during the day, using headphones and different music occasionally helps, but we also share when we feel like it. I listen to music, eat lunch, worry and complain and/or feel elated at having discovered something new. 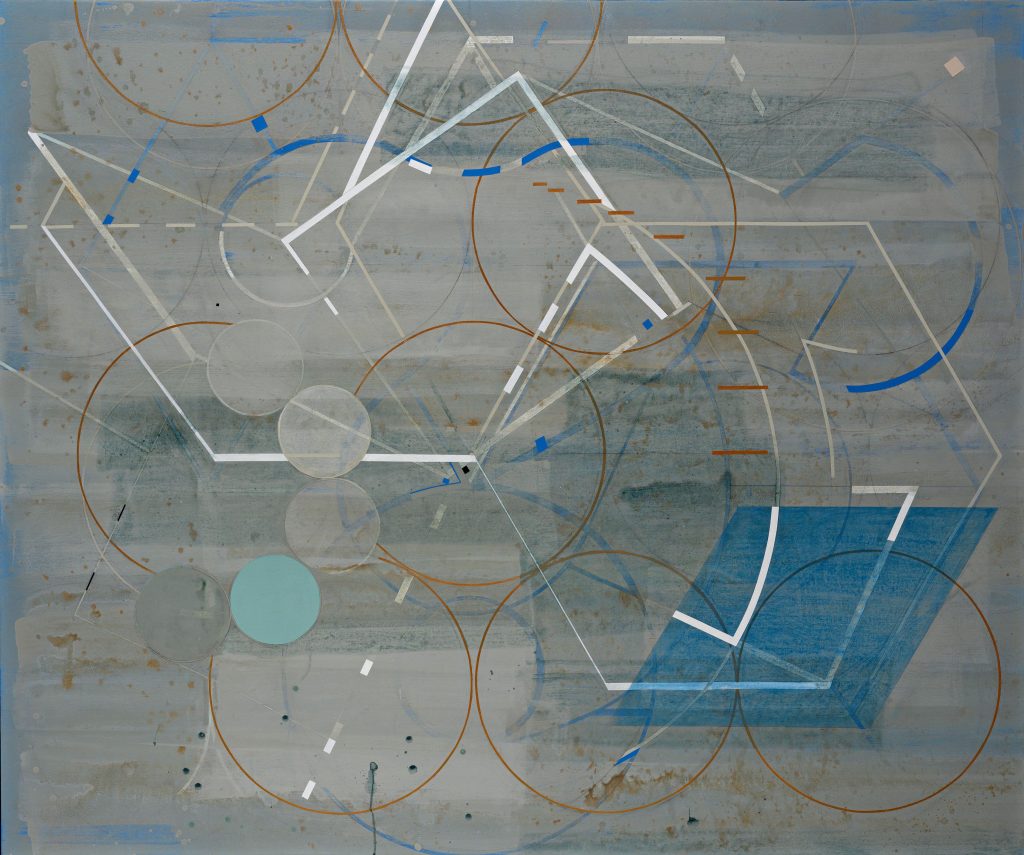 NYSS: Take us through your process. What are some of the parameters or problems you set up for yourself within your work?

JF: I work with two overlapping isometric grids. I use symmetrical planar systems, and through ellipsis of edges create something wholly unexpected, and describe a subjective space derived from what began as objective process. So, there is always intuition and spontaneity involved even though the genesis of my material is fixed.  In that way I work like an architect or a musician. In the earlier series, like the Worldline Schreiber group, my intention was to bring shapes up to the picture plane to create an unstable field with lots flip flopping from volume to flatness as your eyes traveled across the surface.  All connections were buried in a single opaque color. A two-color limit expanded to a three and then four but the grounds remained unmodulated. I decide on the color palette beforehand but that does not preclude many alterations along the way. I premix large amounts of acrylic paint, pints, quarts and half gallons, and save them in covered containers, mixed with my favorite mediums, some fluid and some heavy body acrylics. The color in the most recent work begins with the neutral base of rabbit-skin-glued linen or linen-like color on canvas and builds up like scrims with air between. Line width is very crucial. In the Permanently Temporary, and Balance & Beam paintings, I exposed the connections and using transparency, layered washes and pours, which have long been part of my painting vocabulary, to add atmosphere, another element of time, to the surface reading. When washing with a large soft watercolor style brush or pouring, I work on the floor and sometimes manipulate the canvas to control the flow of the paint. I want the planes and shapes to float and for the surface to breathe which is very different than the syncopation and fully saturated opaque color and pattern of former bodies of work. The washes are very controlled but the pours add a calculated risk to the mix. My main parameter in all these bodies of work is that all shapes and lines come from the grids. Nothing is extraneous. So it is a puzzle that keeps me interested, full of problem solving. I must mention that the looser atmospheric elements that are in the newer paintings have breezed into the work from what I call my Energy Clearing Drawings. These are done very spontaneously and rapidly and show me what I’m think/feeling in the moment. I’ve posted examples of those and the vellum collages that initiated some of the large paintings. 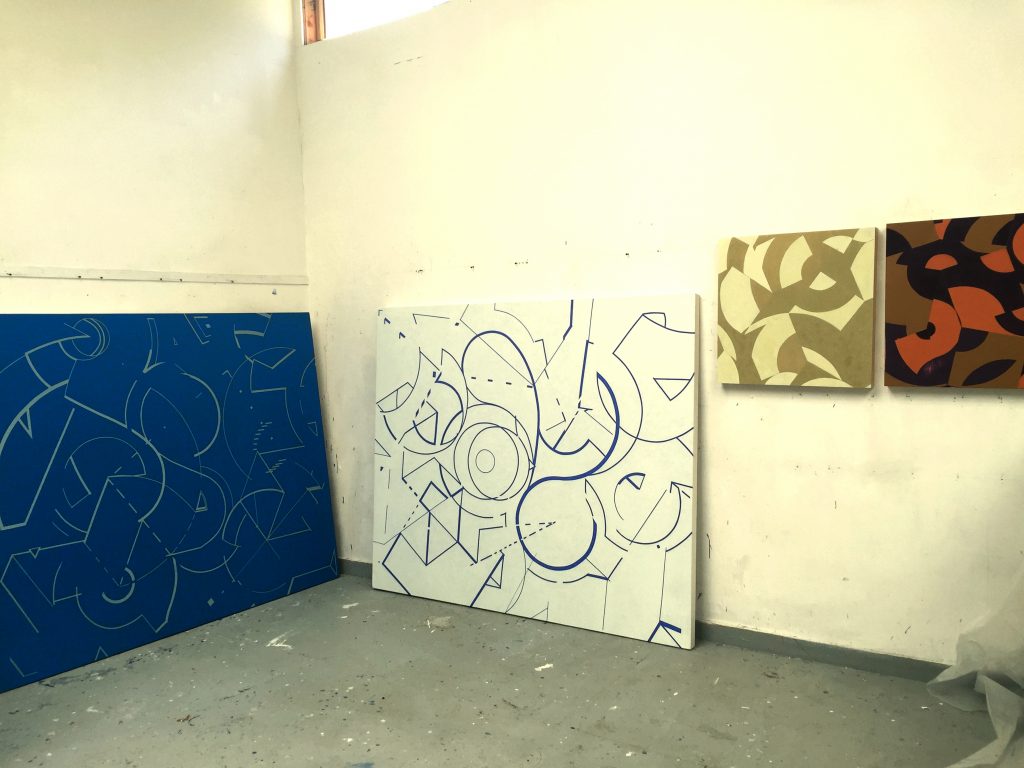 NYSS: How has your practice changed during this time of social distance? Have you had to adapt to a new way of working?

JF: We moved right before the pandemic and left a great studio of more than 33 years. Some of the images here are taken in that studio. My husband is also an artist and it was a shock thereafter to share a tiny space with him during the pandemic, which by the way, we were so grateful for! We lived in an Airbnb for nine months during the pandemic and I did lots of small paintings in a very, very small studio and then began increasing the sizes of work again when we moved to a slightly larger one.  The small paintings done then were an exploration of a geometric configuration that had the qualities of an image rather than a process. The pandemic gave permission to do something different with the material. My new show is comprised entirely of work done in close quarters within the past year. The large paintings were done using the only large wall I had that was clear! We are hoping to build a new studio in our yard in in Hudson very soon. 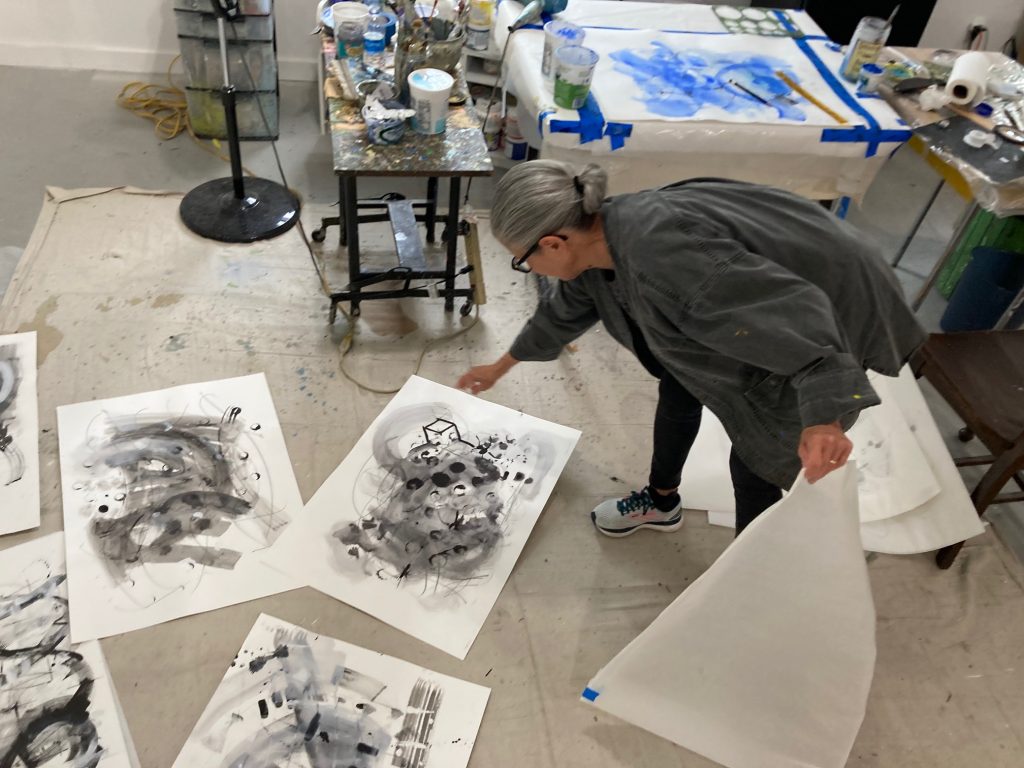 NYSS: What do you keep in the studio for inspiration? Reference material, books about particular artists, music, certain objects …

JF: I don’t keep art books in the studio but I do have photos of my drawings and digital studies that are variations of themes that I come back to.

NYSS: Do you listen to anything while you work?

JF: I listen to kirtan, mantras and Indian classical music mixed in with Bach, jazz, 60s and 70s rock and soul music. I am drawn to polyrhythmic music where the overlapping lines and rhythms are discernible. 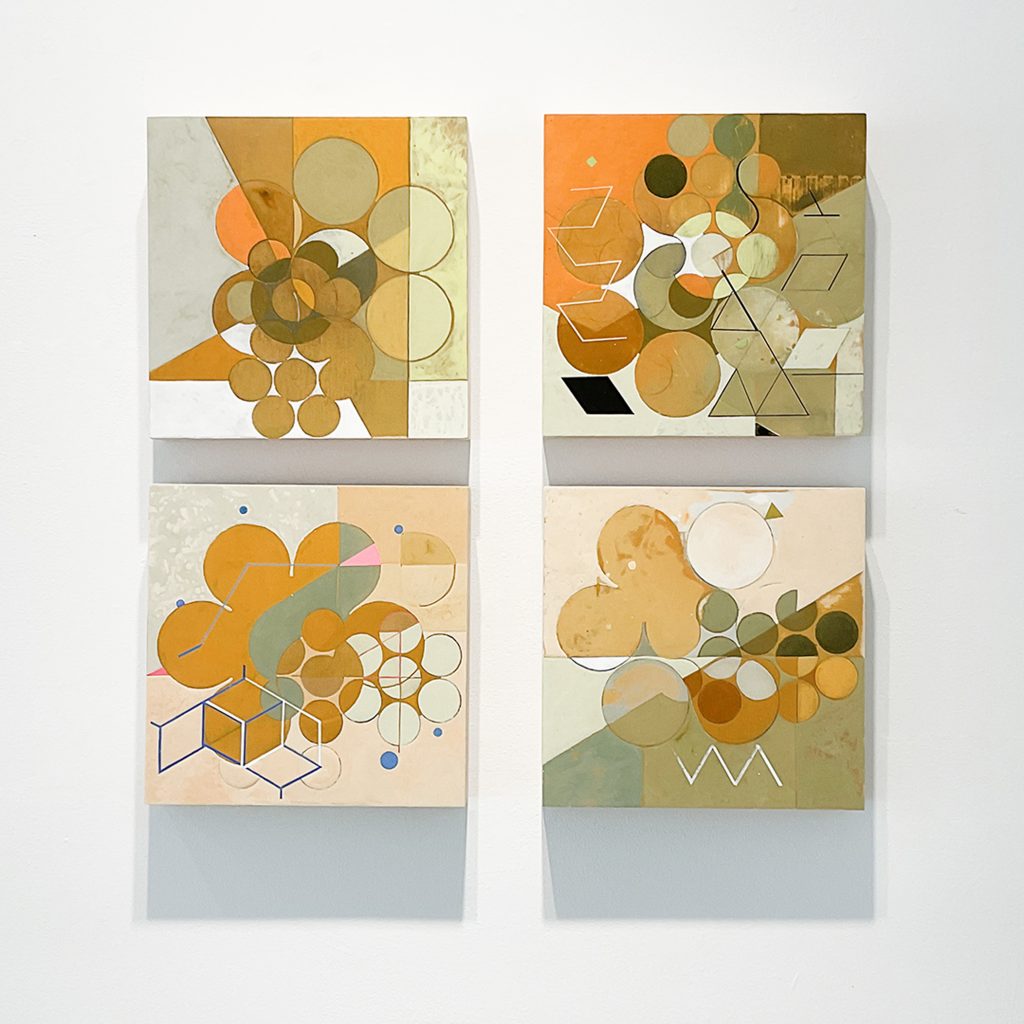 NYSS: How did studying at the New York Studio School influence your work? Do you have a favorite memory?

JF: It is evident that my work is substantially inspired by subtlety of edge relationships and the gesture of spaces. When I studied at the New York Studio School I was already immersed in drawing having studied with Charles Cajori and Louis Finkelstein at Queens College CUNY before attending NYSS. My time at the School Studio reinforced and expanded my sensitivity to the power behind minute and subtle pulls and tugs of linear axis and how those nuances enliven and give tension to the air of a two-dimensional space.  The focused awareness of that time is an anchoring memory in my training as an artist. 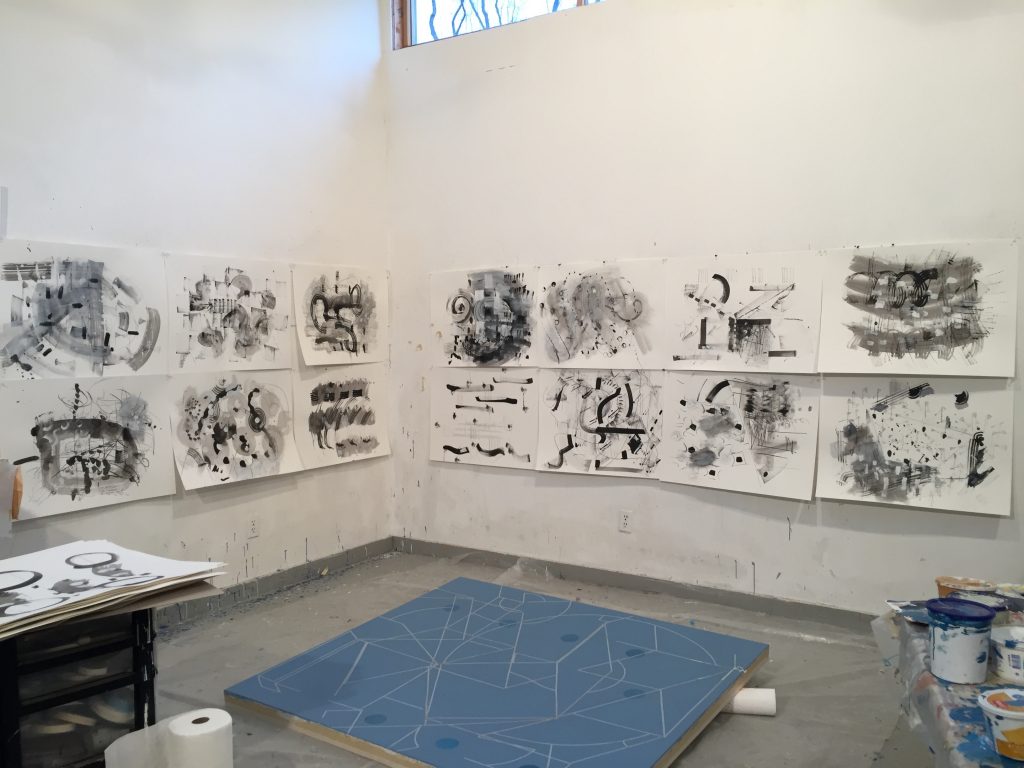 NYSS: Are there any upcoming shows or projects on the horizon you would like to share?! And where can people see your work digitally?

JF: I currently have a solo exhibition at the Carrie Haddad Gallery in Hudson NY on view through August 1st, of work done during the pandemic year. The large paintings are called Balance & Beam _Locus in Transit, the water media drawings are the Blue Mother series and the small wood panels are the Green Mother and Goddess paintings. The latter are based the evocative nature of the circular configuration that became a generative image. I will also be working on a large commissioned painting this summer, derived from one of the Passing Through paintings from 2019. My work can be found at CarrieHaddadGallery.com,  www.jeanettefintz.com, and @jeanettefintz on Instagram. 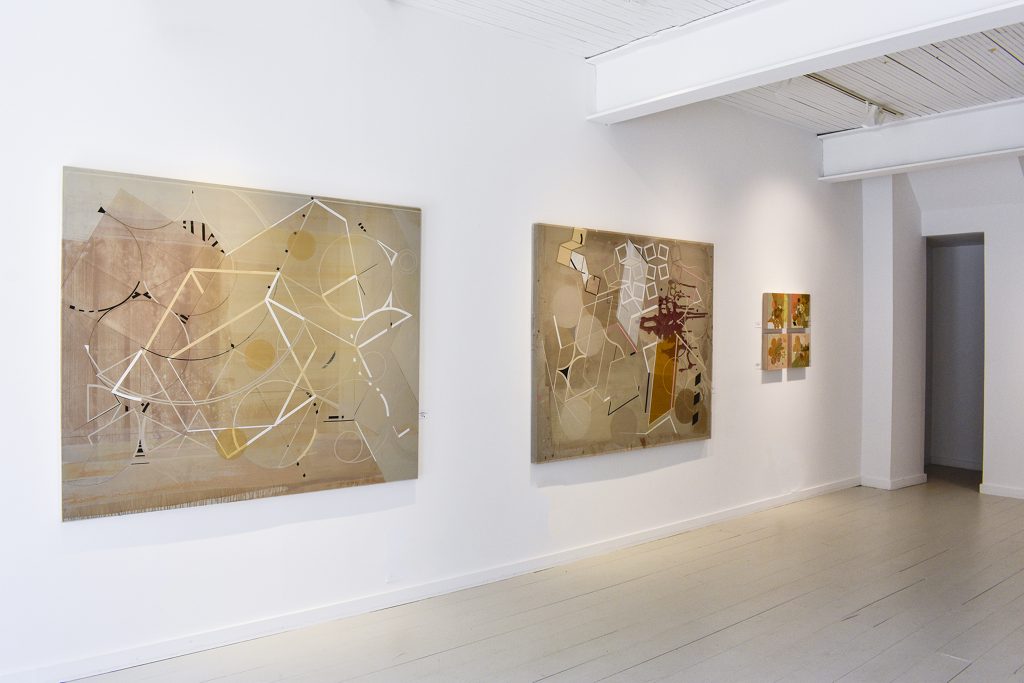 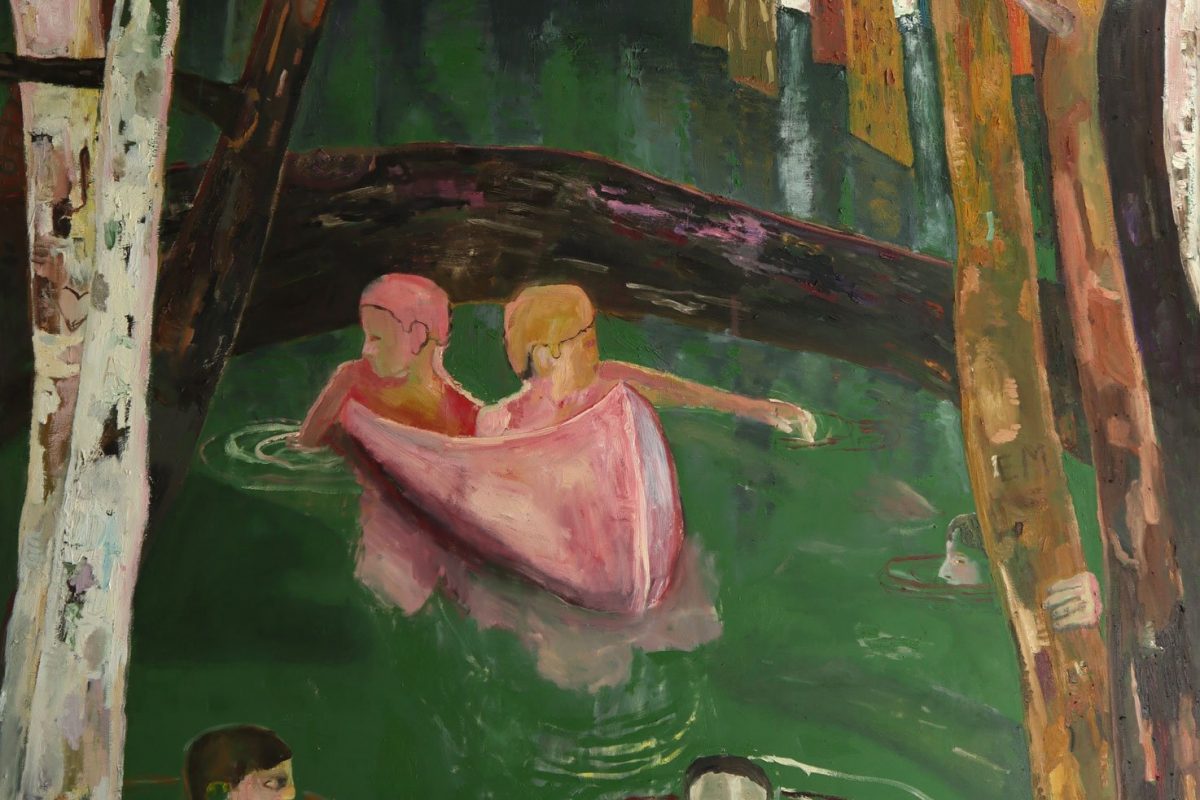 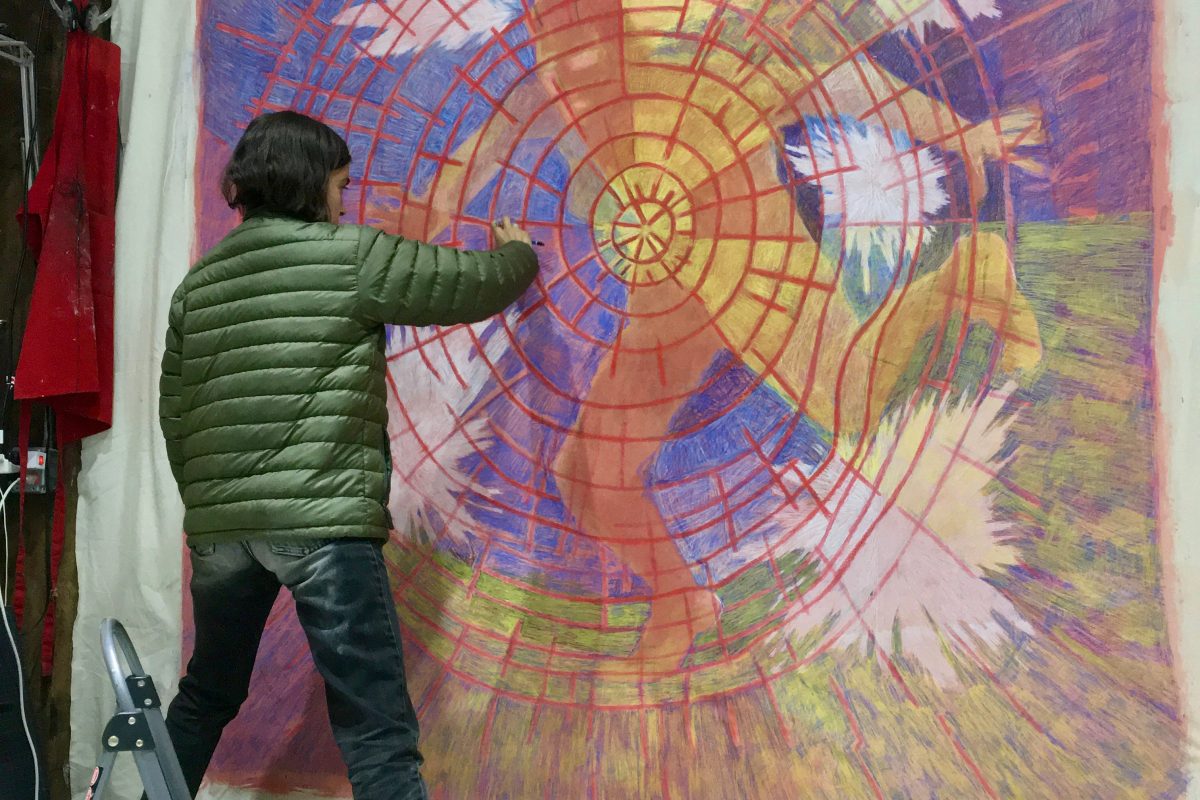 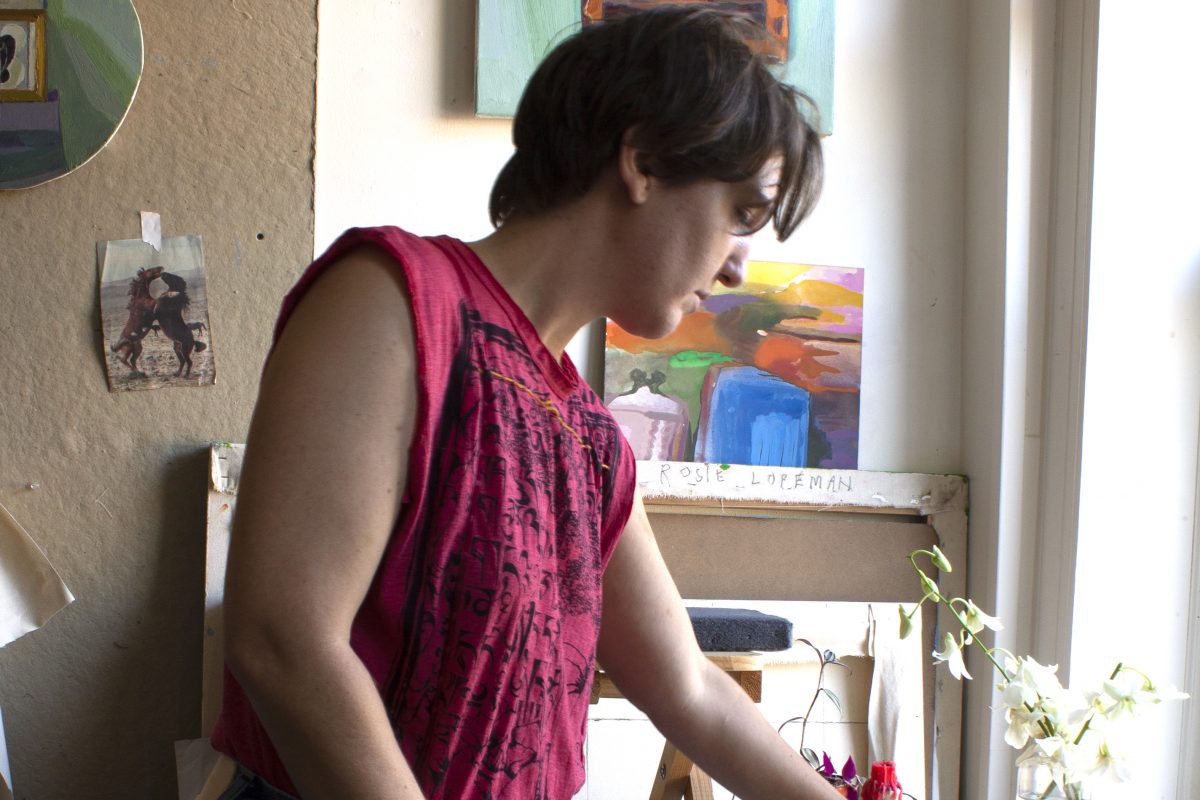 Enjoy a panel discussion on the power of drawing a