TOMORROW, Wednesday, June 29th at 7pm ET on our In

We welcome artists from around the world to join u

Set your sights on an extraordinary exhibition of

Submissions are now open for the 2022 Virtual Alum

The Hohenberg travel award allowed me a month of the freedom an artist craves: time to simply look with the quietness of mind and internal space to welcome the effect of beautiful and astounding things. This past November was spent wandering, seeing and drawing. Weeklong returns to the same museum were punctuated by treasure hunt days to reach sequestered paintings in the small towns where they have held court for ages. 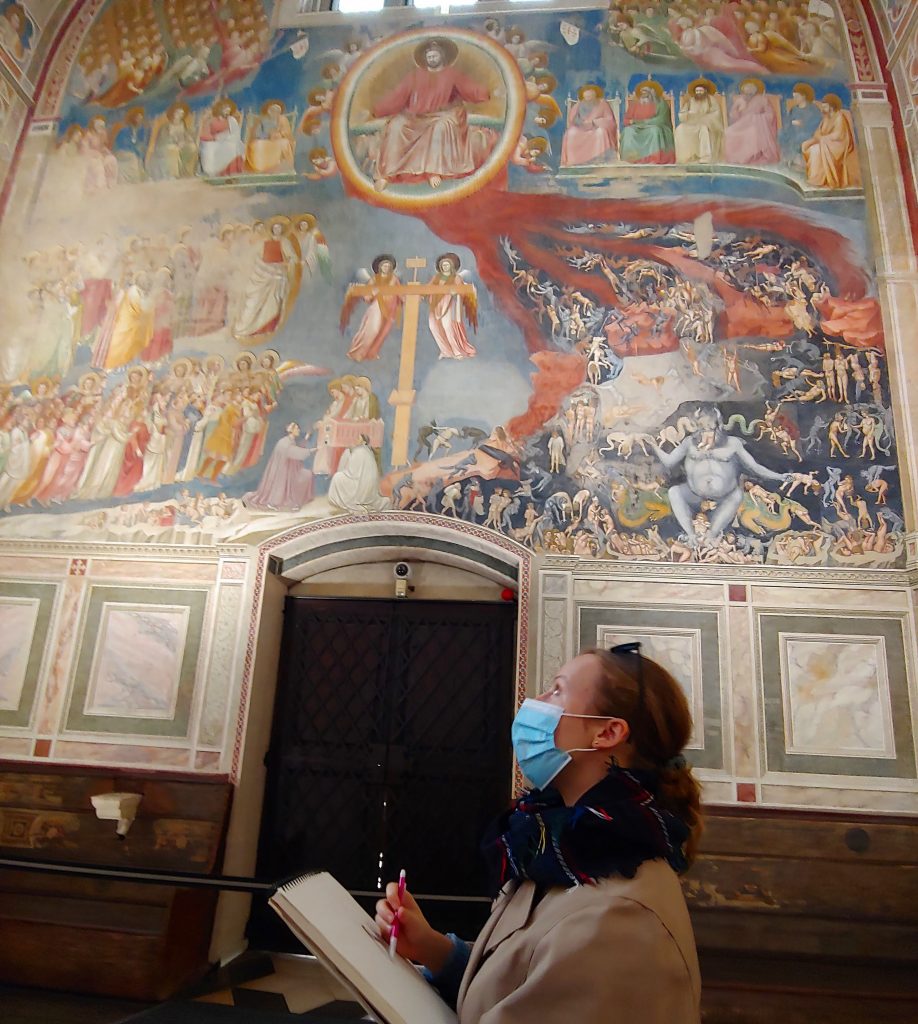 I came armed with a largish book of blank paper, a mechanical pencil and a sheath of pens. I brought watercolors, and acquired colored pencils along the way, but the complexity and largeness of what I was looking at demanded a very simple means of digesting it. A mark maker and a page was more than sufficient. I drew from as much as I could, staking out my claim of well-trod stone to prop my trusty camping stool.

The resulting drawings are not anything marvelous. I would not call them expressive. I look at them and think, wow, I should have captured that swoosh or exaggerated the scale or made a mark to indicate color. But I don’t think I would have remembered or internalized said swoosh or color if I hadn’t simply drawn, unthinking, moving through the space and understanding the picture. The drawings allowed me to sit and think for 1-2 hours in front of an image. If you’d like an account of my exact whereabouts, keep reading. 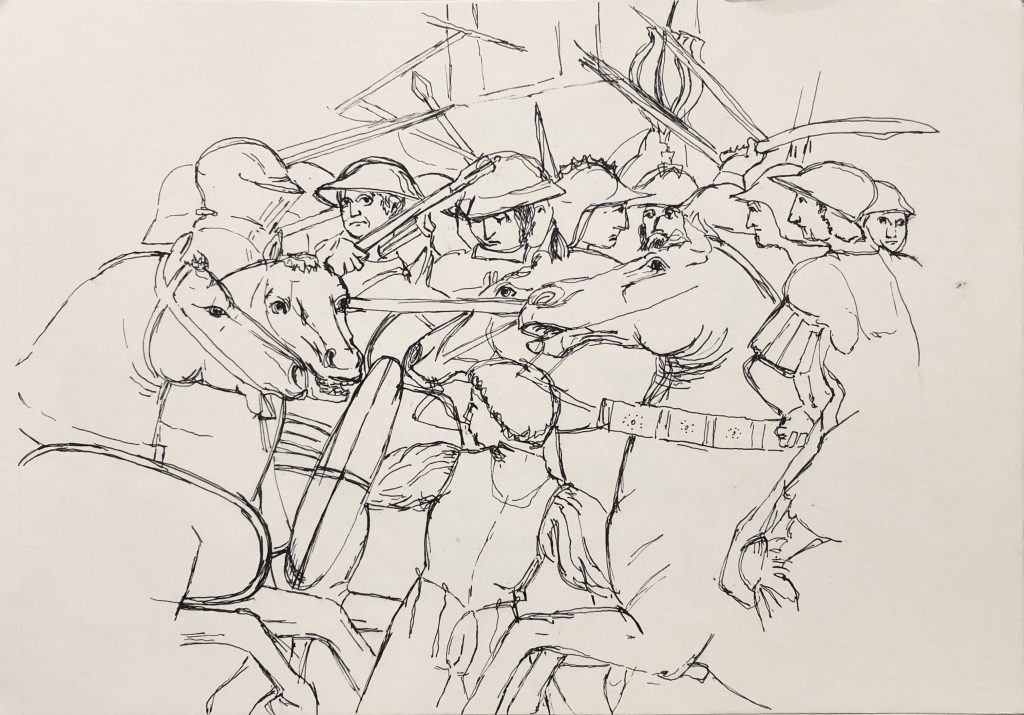 I spent the first week in Venice. I targeted the enormous Tintorettos both in the Scuola Grande di San Rocco and sprinkled in churches all over the city. The effect of the Scuola on me as I first stepped out of the rain into the murky stone hall hung with enormous images was strong enough and I was close to tears as I climbed the stairs and entered the main hall that was simply dripping in the best kind of painting: juicy, explosive, enormous figures, larger than life and screaming out of the ornamented hall that framed them. 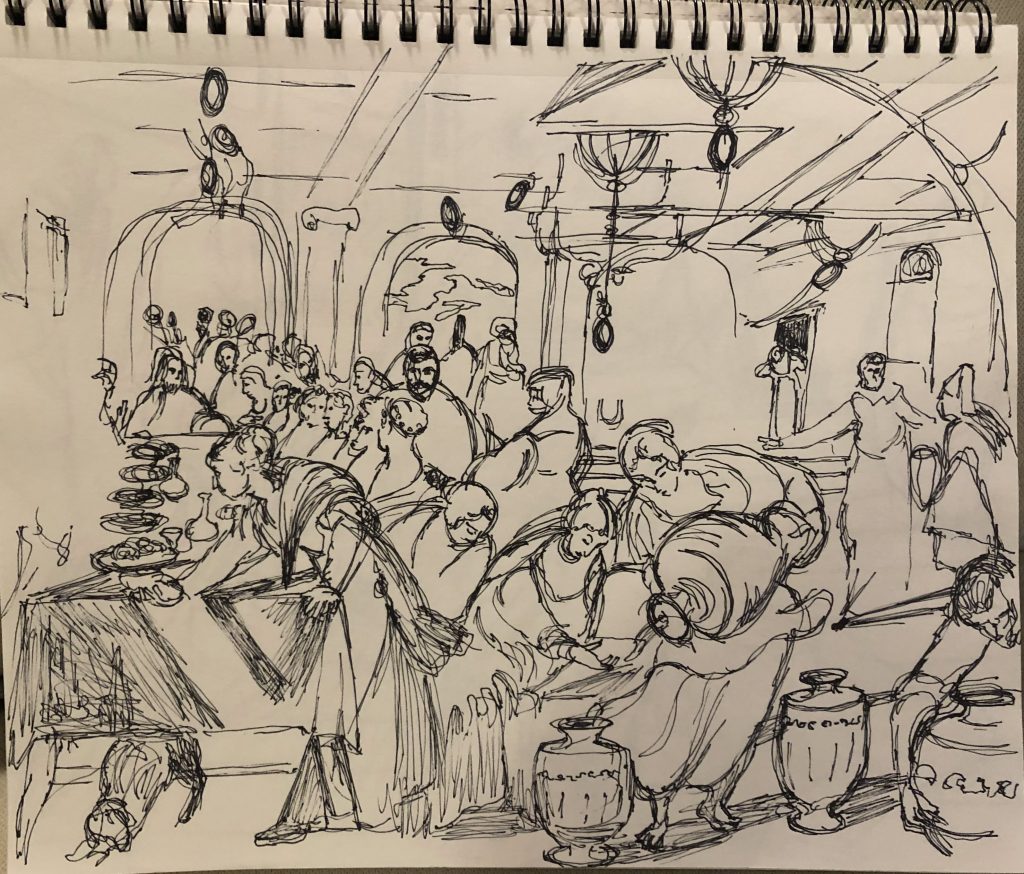 The Carpaccios in the Scuola di San Giorgio degli Schiavoni were a particular highlight, where Save Venice was generous enough to show me their current restoration project. It was fantastic to see the newly finished Vision of St Augustine’s vibrant reds and greens in comparison to the photograph of it’s dulled, amber varnish. A side door was opened for me and there 3 feet from my nose was St George and the Dragon, a painting that usually hangs with the rest of the cycle 8 feet above one’s head in the hall. Chatting with the conservators while it got its laborious sponge bath, so many ideas were introduced to me- how certain painters (i.e. Tintoretto) were utterly chaotic in how they constructed their huge masterpieces, sewing mismatched and sometimes painted on canvases together to achieve the right dimensions. How these Carpaccios were once ripped right off the wall in a panic to save them from a neighboring fire in the 1700s. These stories were like a tunnel through the enormity of time and how humans value and preserve our compounded treasure. Could I ever hope to make something that would be just as precious?

I am going to run out of room if I go on like this. Let’s speed up. From Venice, I took a train to Padua where I was knocked off my feet by the Scrovegni Chapel. Thereafter came trains to Bologna, which had a fantastic art museum, and to Arezzo, where Piero della Francesca’s stunning Legend of the True Cross cycle lives. From there I took a day trip to chase down other Piero della Francesca paintings in Sansepolcro and Monterchi. I ended the Italian leg of the trip in Florence, where I indulged my love of sculpture, Michelangelo and the luminous painting of Fra Angelico. 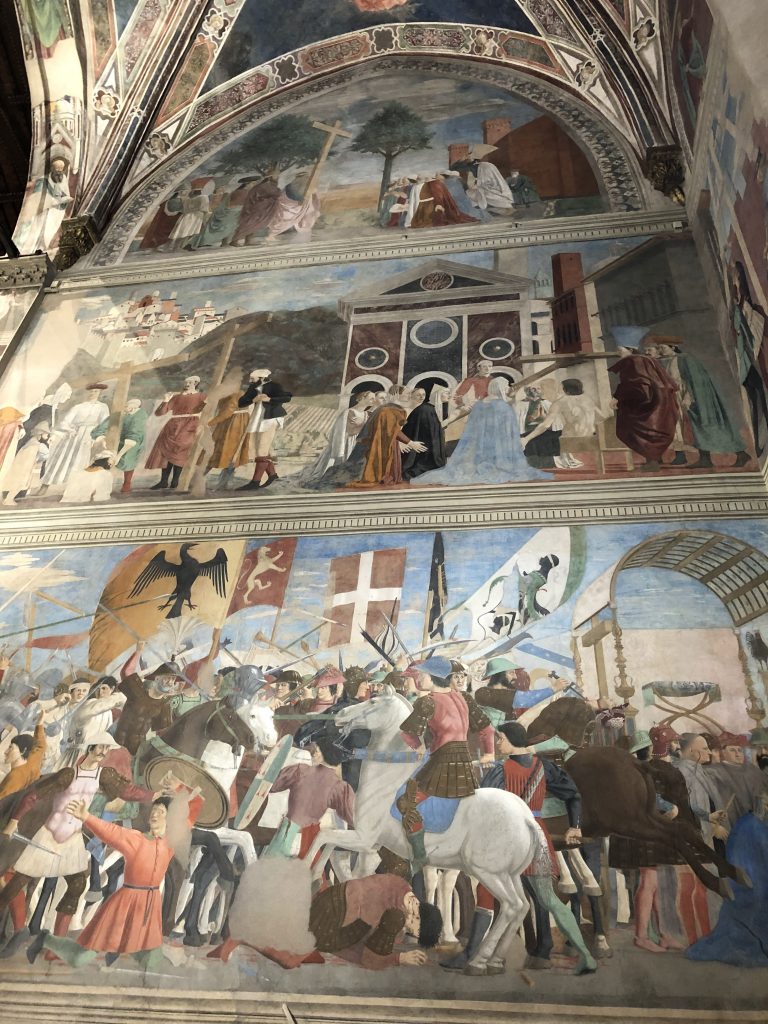 I flew next to Madrid, where I spent the last week of my grant almost exclusively at the Museo del Prado- a place that houses some of my favorite paintings. It was quite something to see them in full size outside of a book or screen, however good the reproduction. A week was needed to do all the drawings I wanted from the Titians, Goyas and Velasquezs in particular. (Velasquez was my first painter hero; I was lucky enough to be on a study abroad semester in Vienna in 2014 when a major exhibition of Velasquez’s Hapsburg paintings was on.) A surprise in Spain was a side trip to El Escorial, the Hapsburg palace and tomb outside Madrid, where I was able to see more Venetian painting than I had in Venice. 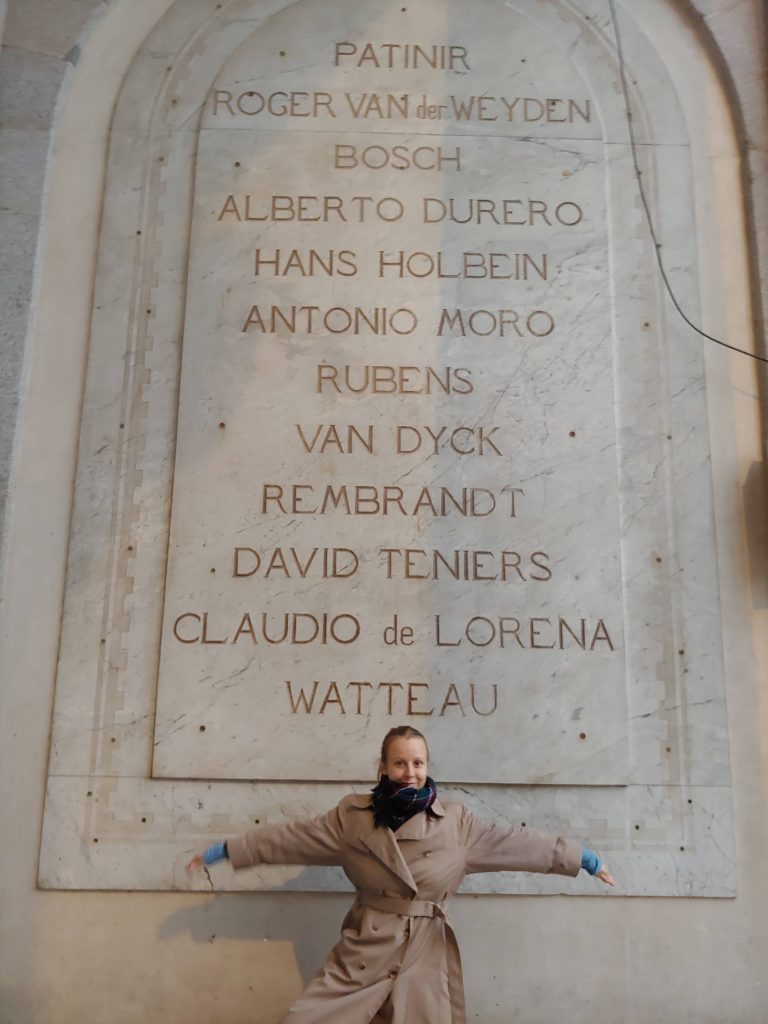 This is just a short summary of how full and rich my time on the grant was. I hope from it you can get a sense of how bursting I am with what I have seen. Returning to the studio was difficult and I had a sense of urgency in the short month and a half until my exhibition. I rest assured that what I saw will influence me over the next many years as I absorb, review and revisit the memory. 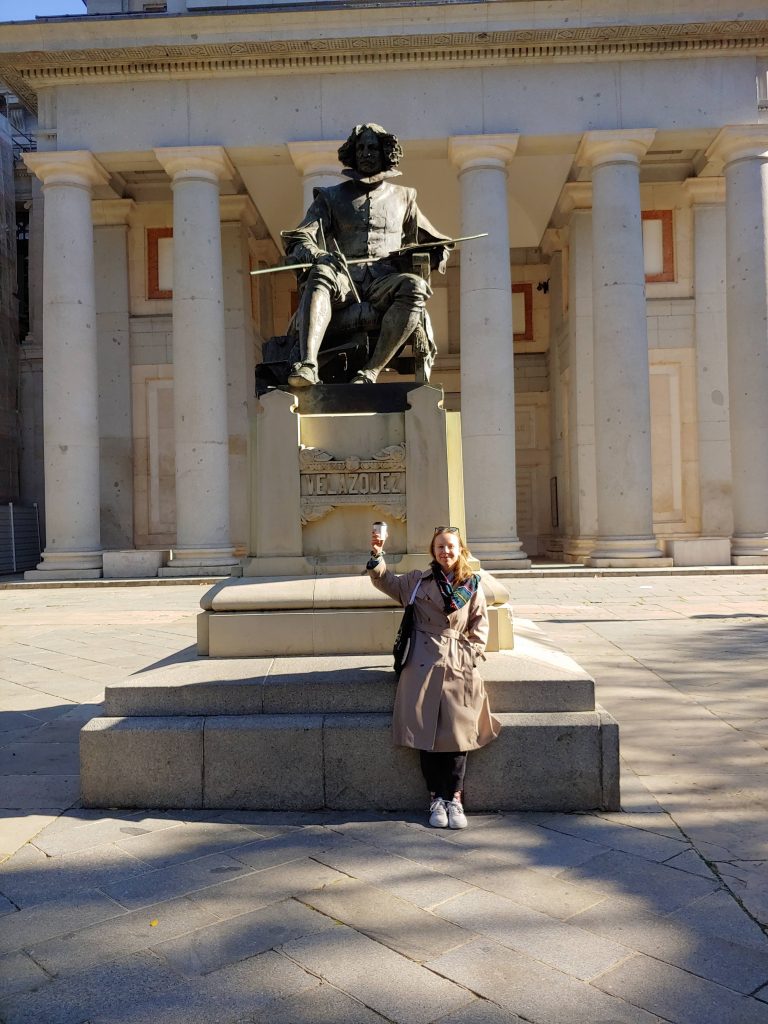 To those who have made it this far, I’ll leave with the special story of seeing the Madonna del Parto by Piero della Francesca. Wearing a garment of a glowing blue, she stands gracefully in a tent, which angels are parting the entrance of, and she indicates the tabernacle of her growing belly that holds Christ. I knew ahead of time that the painting had been removed to an antiseptic and unromantic room with a glass barrier- but in this quiet winter month during covid-times, it was devoid of other tourists and the painting reigned in a sacred peace notwithstanding it’s boring surroundings. It was a happy coincidence that I happened to have a baby growing in my own womb at that moment. My husband, the Madonna and I shared a private and silent hour together. 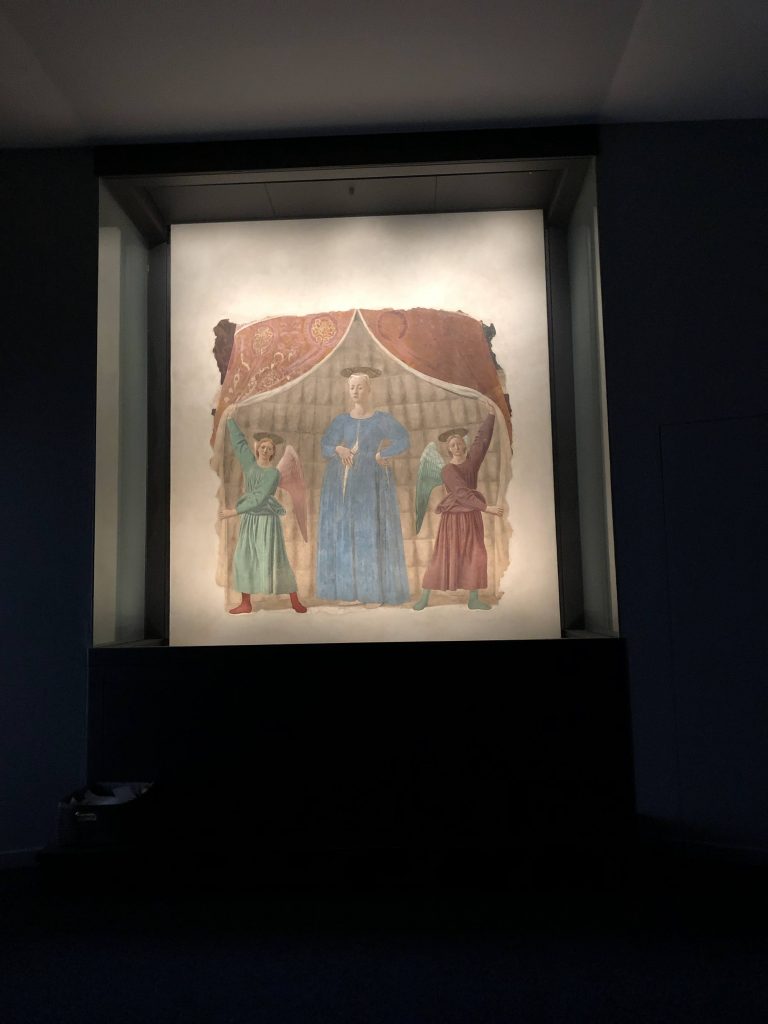 Thank you so much to the Hohenberg Foundation for allowing me this opportunity. It would not have been possible without your gift. 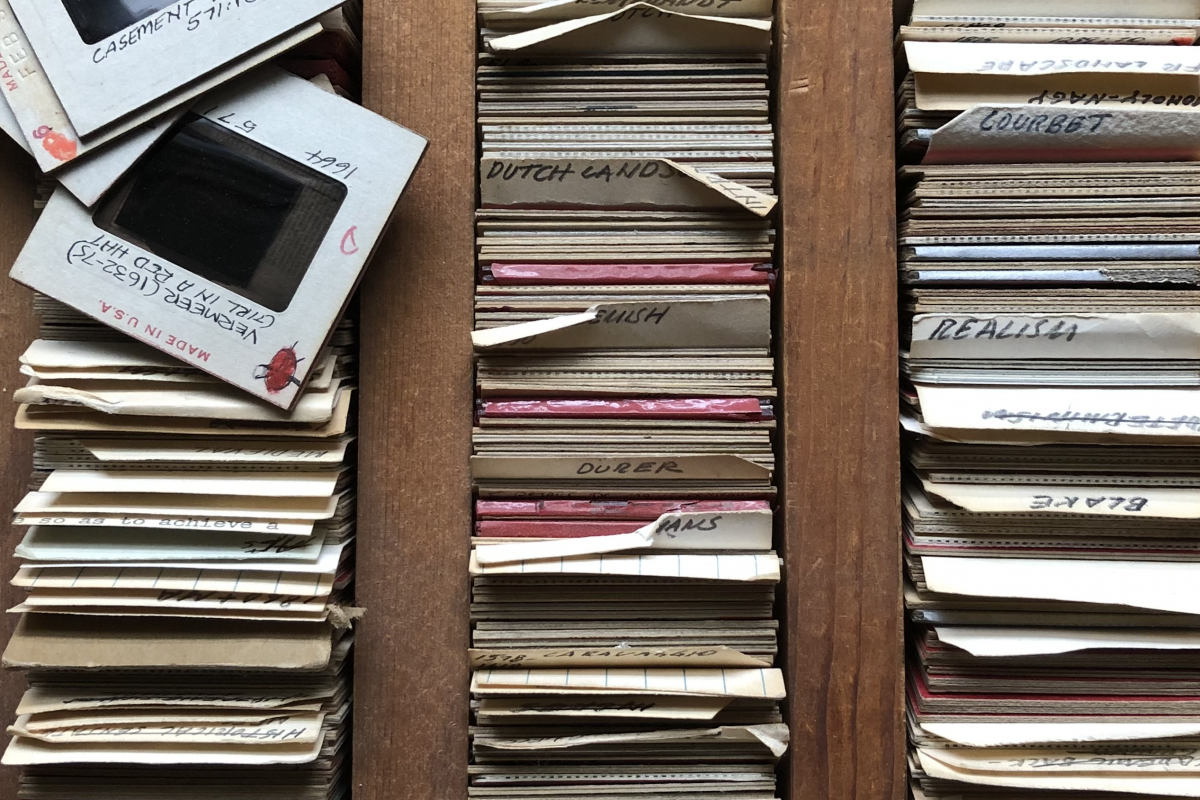 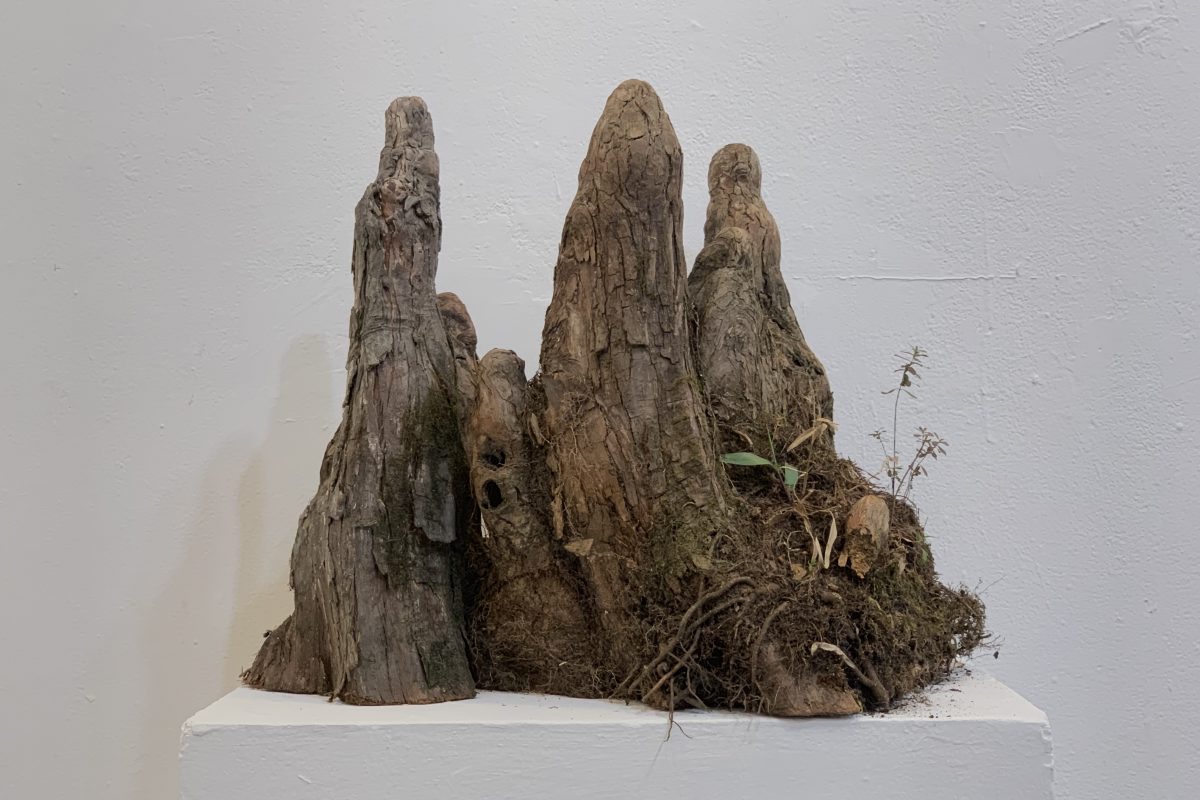 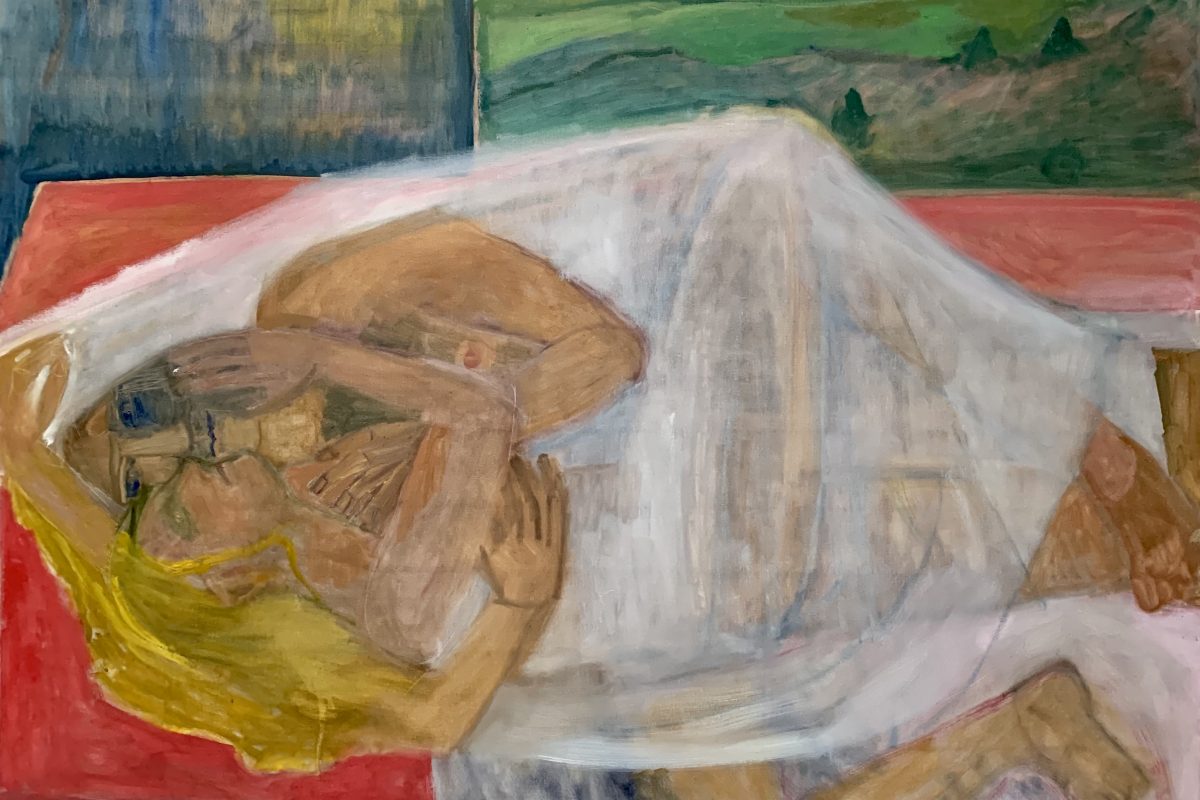